Data standards: Brazil’s election data has the best use of timestamps compared to other countries in the region. Most data is time-stamped, as well as every website page. Data in many cases is also documented well.

Election management body: Brazil provides user-friendly and detailed information on the officials and staff of its electoral management body, the Tribunal Superior Electoral (TSE). The information includes an interactive organizational/staffing chart with hyperlinks to (and a full list of) the names, positions, individual email addresses and phone numbers of staff.

Voter education – Candidate information and status: Brazil’s “DivulgaCand” platform provides a significant amount of data on each electoral candidate. It provides a user-friendly, interactive way to gain information about each candidate’s platform, status and official documents submitted to the TSE. While the provision of official candidate documents is admirable, they are not analyzable, as they are only provided in scanned image files (PDF). In addition to individual candidate data, complete lists of candidates for all elections are available for download in a non-proprietary, analyzable format (CSV). There is no bulk download for all candidates in all elections, however.

Political party registration: Brazil’s data on political party membership stands out when compared to most countries in Latin America. The TSE provides granular data on all individual current and former party members for each party at the state level. The data can be downloaded in a non-proprietary, analyzable format (CSV). While very few countries provide individual member data at all, Brazil goes a step further by providing a rich set of data on each member. This includes date of registration, voter ID number and geographic location by state, city, electoral zone and electoral section. For former party members, it includes date of and reason for cancellation, as well as the date of renewal/reinstatement for those who have rejoined parties. Each file downloaded is accompanied by documentation that explains the data coding scheme. Brazil’s party membership data meets open election data principles.

Polling stations: Brazil’s polling station data meets most open election data principles. The TSE provides a complete list of all polling stations for bulk download in a non-proprietary format (PDF), but unfortunately it is not analyzable. The list includes several geographic levels, as well as the unique identifier and address of each polling station.

Election results: Brazil provides three different options for obtaining access to election results with different levels of detail and different interactive features. Each of them has different positives and drawbacks when considering open election data principles, as described below.

Figure 2: Brazil - Downloadable Polling Station-level Results for Each Candidate
Users can select any candidate from any 2014 election and download a CSV file with the results from all polling stations for that particular candidate (http://apps.tre-ms.jus.br/SDR2014/). 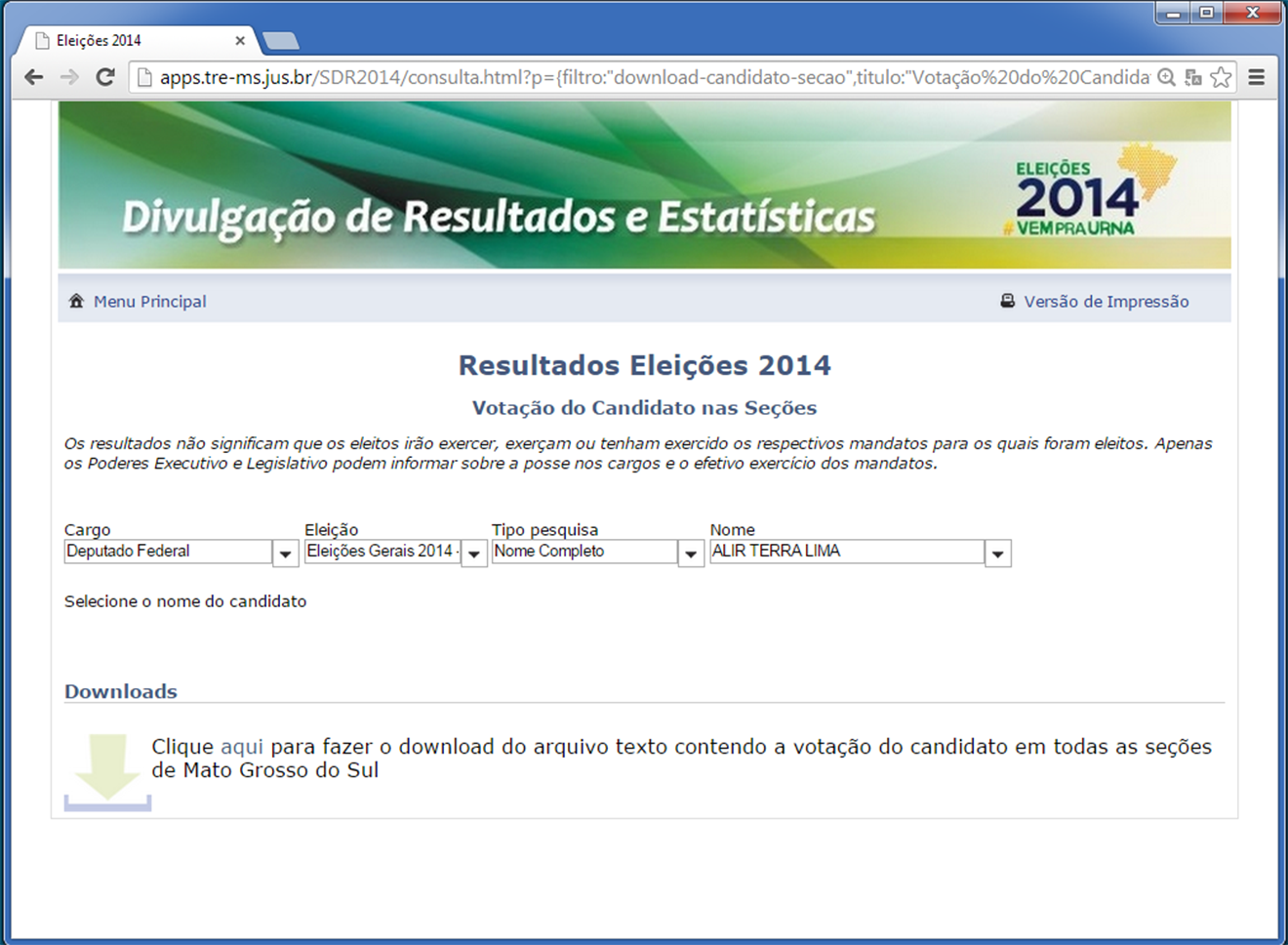