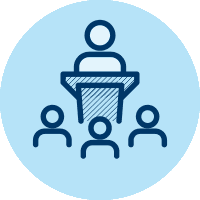 What are election campaigns?

Election campaigns are the means by which candidates and political parties prepare and present their ideas and positions on issues to the voters in the period preceding election day. Contestants use a variety of techniques to reach voters and deliver their messages, including through traditional and new media, public events, written materials, or other means. In some countries, public media and/or space are allocated to contestants for these purposes (considered indirect public campaign financing). The dates of an official election campaign period, usually a period of a month or several months leading up to election day, are often legally defined. In many countries, the legal window for campaigning will end a day or two prior to election day, providing a so-called “black-out period” immediately before voting begins. Parties and candidates will establish physical premises from which they carry out campaign activities and overall operations.

Why do election campaigns matter?

Democratic elections require an informed as well as a free vote and a fair chance for contestants to win support and motivate supporters to help them gain office. Election campaigns are vital to achieving those goals. Elections that are genuinely competitive offer equitable opportunities for contestants to convey their positions to citizens and compete for votes. Election campaigns provide candidates and political parties with opportunities to present their message to citizens, helping voters make educated and informed decisions on election day. In order to help ensure an even playing-field and an election that ultimately reflects the will of citizens, any public resources allocated to election contestants must be equitable. Decision-making processes about how those resources are allocated should be transparent, so contestants and the broader public can understand and trust the outcomes. With access to information about election campaigns, including the official campaign window and public resource allocations, parties and candidates can design their campaign activities and understand what they are entitled to from the state, if anything. Access to data about election campaigns allows contestants and civil society to explore whether candidates have equitable access to whatever public campaign resources are provided in a given context, if any, including media and space for campaign events like rallies. Where public media is allocated to contestants, then parties, candidates and citizens can consider whether the allocation process was credible and the resulting allocations, equitable. Even in contexts in which there is no allocation of public resources for campaigns, contestants and civil society can examine whether there was any unfair or biased treatment in how contestants were allowed to conduct their operations. This might include whether party offices were permitted to operate, or whether permits were distributed in an unbiased manner for rallies or other campaign events. Transparency in these areas boosts confidence in the election process on the part of contestants and voters, and may serve to shed light on any unfair practices or potential abuses of state power where they exist.