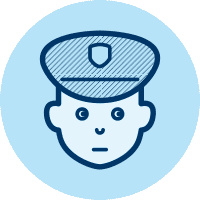 What is election security?

In any election, authorities take steps to ensure that voters, candidates, pollworkers, observers, and other actors involved in an election experience the process free from fear or harm and to ensure that sensitive election materials are kept secure. The specific security requirements for a given election will vary greatly depending on the context. In places with ongoing conflict, or where there is a significant potential for violence, securing an election will need to address a multiplicity of factors and will likely involve deploying relatively large numbers of security personnel, such as police or military forces, to protect physical locations and individuals. In every election, there will be plans in place for the secure transfer and storage of election materials, especially ballots and ballot boxes. Safeguards to any technologies used in the election process should also be adopted to prevent hacking or manipulation.

Potentials for violence in election periods come from political, economic and social dimensions of a society. Effective violence mitigation plans often include identifying early warning signs, mobilizing citizen monitoring and mitigation efforts, dispatching properly trained security forces, coordinating among government agencies and educating the public, among other things. Multiple institutions, including EMBs, ministries of interior and other relevant bodies, may be involved in creating a secure election environment. These institutions work to develop, implement, and review security measures throughout the electoral process. Civil society, through CSOs, trade unions, religious and traditional leaders, and the media, also plays important roles in creating a secure electoral environment by mediating, building intolerance for violence and enhancing public confidence in experiencing secure electoral participation. In many countries, like Kenya and Nigeria, plans for electoral security take into account such activities by civil society. In Kenya, civil society and electoral contestants were included in coordination efforts so they could contribute to policy formulation for the 2013 elections.

Electoral violence is violence intended to influence the electoral conduct of voters, contestants, officials, or other actors and/or to affect the electoral outcome. Electoral violence involves any use of force with the intent to cause harm or the threat to use force to harm persons or property involved in the electoral process. Typically, electoral violence happens among or even within the camps of electoral competitors in depraved efforts to gain office through elections. Forces opposed to democratic governance may attack electoral targets to advance their quest for power outside of electoral competition. Other violence, based on personal animosities or grievances between population groups, may take place in an election period though it is not directly related to elections. Election security planning has to consider the potentials for all of these types of violence and how to prevent, mitigate or end them while respecting fundamental rights.

Why does election security matter?

In order for an election to be inclusive, participatory and competitive – and ultimately, to reflect the will of the people – it is essential that electoral contestants can campaign; citizens can cast informed, secret ballots without fear of retribution; officials can effectively administer the process; and civil society, media and parties can engage and observe, free from fear and harm. In many places, EMBs help coordinate processes and personnel to protect various aspects of elections. The security plan for a given election must take into account the implications of deploying armed personnel. While their deployment can be necessary where potentials for electoral violence are significant, their presence may intimidate or dissuade citizens from participating. Input from civil society in the planning phases can help ensure that citizens’ concerns are more fully considered and that they are informed about the measures in place to ensure their security. At the same time, electoral security requires more comprehensive measures than deployment of security forces. The analysis of past incidents and patterns of violence is vital for allocating anti-violence resources. Identifying early warning signs is necessary for preventative measures, while addressing rumors concerning potential or actual incidents of electoral violence is important for mitigating potentials for violent reactions. Often, this means that information must be available in near real-time to be effectively used.

The physical security of election materials is also critical. If sensitive materials – especially ballot papers and ballot boxes – are not adequately secured, there is the potential for actual or perceived manipulation, diminishing public trust in the process and acceptance of the outcomes. The public and electoral contestants must be informed of this aspect of electoral security to have confidence in the integrity of elections.

The institutions involved in the security framework should be, and be seen to be, transparent and unbiased. Judicial institutions should provide accountability for the elections security framework and redress complaints related to election security and electoral violence. In 1997, Mexico formed the Federal Special Prosecutor’s Office for Electoral Crimes (Fepade in Spanish) within the Federal Attorney General’s office and created a special category of “electoral crimes.” Fepade was tasked with investigating citizen allegations of electoral violations and working to prevent electoral crimes, which they primarily have done through outreach to citizens to raise awareness of their electoral rights.

The public should be able to see that effective measures are being developed to provide electoral security. Information about election security measures can bolster citizens’ trust in the process and enable full participation as voters, candidates, pollworkers, observers, or other roles. Civil society and contestants can examine the security measures in place to determine any necessary reforms going forward. With access to information about the election security apparatus and decision-making process, civil society, political parties, and media can make sure that the EMB and/or the security forces are following proper procedures and playing a positive role. Verifying their own reports through official data about incidents of electoral violence helps citizen observer groups better assess the process from an impartial perspective. Further, with access to information about how electoral crimes are prosecuted, and who is responsible for prosecuting electoral crimes, these groups can also hold judicial institutions accountable for the proper prosecution of crimes and redress of complaints and provide timely, accurate information to victims about how to peacefully seek justice for an act of electoral violence.

Election security data includes information from regulatory, security, and judicial institutions. Data from the regulatory institution includes the specific standards and/or clear rules for engagement of the police and military in the electoral process. From the regulatory institution and/or security institutions, all non-sensitive deployment plans for security forces should be made available to the public, as well as the deployments strategy for personnel present at polling stations on election day, including the number of security personnel that should be present at each station. Police should also collect and make publicly available information on incidents of electoral violence. Incident reports should be detailed and include type, date, time, place, victim(s), perpetrator(s), witness(es), gender(s), ages, any political affiliations and a brief description. From the judicial institution/s, data includes information about how electoral security and violence complaints are handled, including the legal framework, if any, and the legal adjudication process for election-related security incidents.