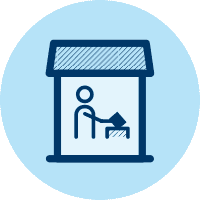 What is a polling station?

Polling stations are also the physical voting location to which voters go to cast their vote. Election management bodies (EMBs) should create clear procedures for choosing, setting up, and supplying polling stations with the materials for voting. Polling stations should make the voting process accessible to all citizens, including persons with disabilities. In order to make sure that people who cannot travel to a polling station have the chance to vote, EMBs often provide special polling stations or mobile voting to accommodate these voters. For example, mobile ballot boxes and ballots may be brought to people who cannot leave their homes because of illness.

Why do polling stations matter?

Prior to election day, the EMB should release data relating to all of the individual polling stations, which might include each address, notes or directions, contact information for election commission staff, latitude and longitude coordinates, names and titles of electoral officials for that station and the unit to which its reports (e.g., district number and names and positions of the district electoral officials), date of formation and duration of existence, number of voting streams or “tables” (if applicable)1, number of registered voters and the maximum number of registered voters per station.

The EMB should also publish general procedures for the election day process at polling stations including the setting up and supplying of polling stations. This is often outlined in pollworker manuals. Relevant information might include the hours of operation, lay-out inside the polling station, number of ballot boxes, flow of voters and necessary supply of voting materials like ballots and indelible ink.