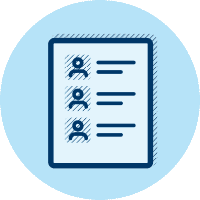 A voter list is a detailed record of every person who is registered (see Voter Registration) and eligible to vote. The voter list also includes relevant information used to identify voters and assign them to a specific electoral district (see Electoral Boundaries) and polling station (see Polling Stations). A master voter list is divided into sub-lists for use at each polling station. Polling station voter lists typically only have the names of people designated to vote at that specific polling station. This makes it quicker and easier for election officials to determine who has the right to vote. In many countries, voters can check their personal registration details, including their assigned voting location, often using a national ID number. In some places, like in South Africa, the voter list look-up system is available by SMS. When voters present themselves at a polling station, poll workers check that their name appears on the voter list before they cast a ballot. Signatures on the list often form the basis for the final turnout calculation for each polling station on election day. In some countries, at specified times, polling station turnout is also announced throughout the day. The number of voters assigned to polling stations varies across countries, typically with 500-800 at the lower range and 1,000-1,200 at the upper range.

Why do voter lists matter?

In order to make sure that eligible voters are able to vote and ineligible people are not, voter lists must be:

With access to the voter list, citizens can check their individual registration status and details for accuracy. In a number of countries, voters can also verify the location of their polling station, so they know where to go on election day.

Public access to voter lists can increase the accuracy and completeness of the voter list if individuals have sufficient opportunity to correct any errors or update their information. The ability to view and correct the entire list can boost public confidence in the voter registration process, electoral authorities and election process more broadly. Access to the voter list gives political parties an opportunity to make sure that their interests are respected – for instance, allowing them to check voter registration rates in their geographic bases of support. Civic organizations can check the quality of the voters list through an independent audit or other impartial review procedure. Such an assessment may highlight positive aspects of the voter list as well as any issues that need to be addressed such as cases of individuals who are registered multiple times. Access to population information, like census data, allows for better assessment of voter lists. For instance, stakeholders can compare voter registration rates to census data to look for trends and identify populations that may be under-registered or other areas for improvement.

The information included in voter lists varies from country to country. In addition to the names, birth dates and place of residence of voters, other information in the voter list may include: date of registration, gender, ethnicity, occupation, national ID number, passport number, elector number or voting card number, registration address, temporary registration address, relevant sub-national levels of electoral geography, polling station code, polling station name, voting history, and any “special” status (e.g., noting if the voter is an Internally Displaced Person (IDP)) or member of the military).