1. A Gentle Introduction to Summarizing Data

In this tutorial we are going to define some common terms and concepts including the basic types, or categories, of data. Then we’ll learn how to describe a dataset. By the end you will be prepared to take the concepts here and use them to summarize the polling station list in the next module.

We begin by learning some common terms used in examining data.

Any characteristic of an individual (i.e., observation) is called a variable. Some variables, like gender and job title, simply place individuals into categories. Others, like height or number of registered voters, take on numerical values for which we can do arithmetic. Next we’ll take a closer look at the different types of data.

Data is stored as different types, which are sometimes referred to as the “level of measurement”. We need to understand the type of data because it helps us figure out how to properly summarize it. There are three types of data:

By first understanding what type of data a variable is, we can then decide how to best summarize or describe that variable.

The two most useful ways of describing the distribution of data are:

These two ways of describing the data are also referred to as descriptive statistics.

1. The Center: What is Typical? (Central Tendencies)

The three common ways of looking at the center are average (also called mean), mode and median. All three summarize a distribution of the data by describing the typical value of a variable (average), the most frequently repeated number (mode), or the number in the middle of all the other numbers in a data set (median).1 In this module, we are going to focus on the average. The average is the most appropriate way to measure the center for interval/continuous data (e.g, numbers of registered voters). To calculate the average, we add up all the numbers for a variable and then divide by how many numbers there are. Put another way the average (mean) is the sum divided by the count.

In the example dataset below, we have information about the names of some animals. We also have measurements of the height of each animal. The dataset has two variables – name and height – and five observations. Here is the dataset: 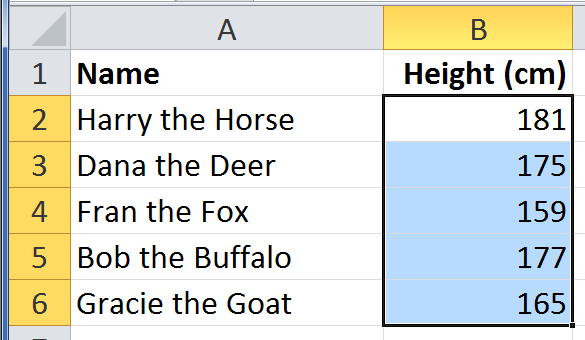 Here we’ve made a quick chart that plots the height of each animal:

To calculate the Average height (in cm) we sum up all the values and divide by the total count of observations:

The average value for height is 171.4 centimeters. Here we have added a reference line marking the average on our chart so we can see how that looks:

2. The Spread: How is the data distributed around the center? (Measures of Dispersion)

This is the difference between the largest and the smallest values. It is the distance between the extremes. To calculate the range, we take the maximum value and subtract the minimum value.

In our height dataset, what is the largest value (maximum)? 181 cm
In the same example, what is the smallest value (minimum)? 159 cm
The range in our small dataset of heights is 181 - 159 = 22 cm
Here we added some reference lines on the chart to indicate the maximum and minimum:

While the range gives us the endpoints (i.e., extremes), it does not tell us anything about how tightly or loosely the data are distributed between those two endpoints. We also do not know whether more of the data is closer to the average, the maximum or the minimum. From our chart, it looks like just over half of the animals are tall (i.e., above the average height).

Two other related measures of dispersion–the variance and the standard deviation–can help us answer these questions. They provide a numerical summary of how much the data are scattered. 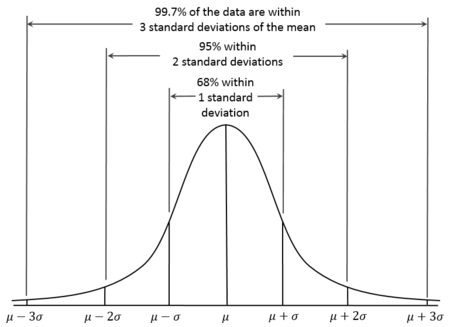 In Module 3, we use Excel to summarize the data in the 2008 polling station list.

In the sample animal heights dataset, we’ve calculated the standard deviation for heights. It is 9.1 cm3. On the chart we have shaded the area to show what data is within three standard deviations (9.1 x 3) of the average. Any data within this range is “normal.”

Test your knowledge by answering these questions:

Play with the Data

If you want to perform your own calculations, here is the heights dataset. The data along with some calculations are available as an Excel file or an Open Spreadsheets file.

It looks complicated, but the important change is to divide by N-1 (instead of N) when calculating a Sample Variance. (Remember that the Standard Deviation is just the square root of the Variance, so the formula for calculating the Variance is the same formula above but without the Square root part.)